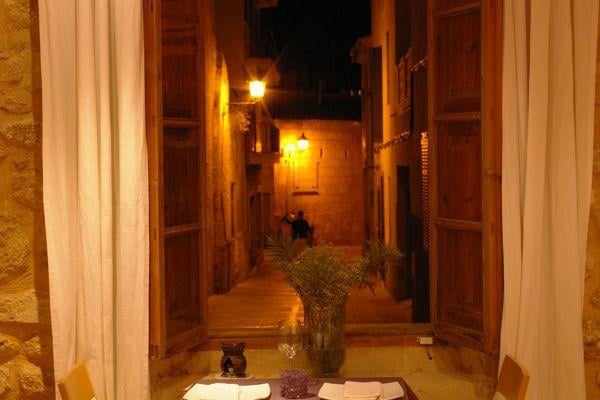 Inside Alcúdia's restored town walls lie the narrow streets and 16th to 19th century houses of the old town. Many secrets are waiting to be discovered here, and L'arca d'en Peter is one of the best of those. The streets of the old town have been restored and are well-paved and well lit in a very soft and harmonious way, so, even at night, the stroll to the restaurant is very pleasant and relaxing. L'arca d'en Peter occupies part of the ground floor, plus the gorgeous walled courtyard of the hotel Ca'n Simó, and has three separate entrances so, even if you go a bit wrong, you're still likely to find it! Our handy printable map and GPS co-ordinates will make it easier.

Naturally, the restaurant is well fitted out and equipped to modern standards, but you feel a strong connection to the past thanks to the immensely thick stone walls, and the exposed underfloor excavations which can be seen through safety glass. The ambience is traditional Mallorcan, although the diners when we were there came from several different nationalities, and it was fascinating listening to the different languages being spoken.

The à la carte menu at L'arca d'en Peter is based on creative market cuisine using fresh seasonal products. There's a definite International note to some of the dishes, which gives the restaurant a broad appeal, and there are several clever and creative Mallorcan touches. For our starters, we chose tempura vegetables which were deliciously hot and crispy, and were accompanied by a soya based dipping sauce, as well as millefeuille escalibada (grilled vegetables Catalan style), with anchovies and black olives. It's worth mentioning here that the portion sizes at L'arca d'en Peter are generously large!

For our main courses, my partner decided on the monkfish brochette while I went for the sirloin steak. The brochette of monkfish with gambas was served with black rice and, with its swirl of sauces, was a gloriously colourful dish, and a substantial one. My sirloin steak was absolutely superb quality, and it was cooked exactly as I had ordered. I really can't praise this simple dish too highly - it's hard to beat a good steak, and this is easily the best we've had on the island so far.

I almost forgot to mention the wine list at L'arca d'en Peter, which offers a wide choice of wines from the island and the mainland, plus a good sprinkling of choices from further afield.

The service at L'arca d'en Peter is warm and friendly - in other words, typical of the wonderful people of Mallorca. When you visit Alcùdia, as many do throughout the year, look a little further than the café restaurants in the main square and give L'arca d'en Peter a try. You will not regret it!