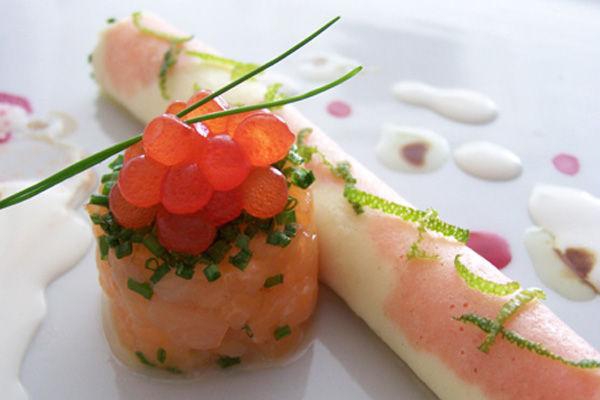 It’s a huge pleasure just to be in the company of Pepe Pintos, and it’s an even greater pleasure when you are in Pepe Pintos Restaurante, where you are treated like a guest in his home.

Cocinero means cook in Spanish and Pepe Pintos Cocinero is the name that this charming man has given to the restaurant and catering business he owns in Palma de Mallorca. This multitalented dynamo is also the sole chef, and the creator of the artworks that decorate the walls of his relaxed eating place. This is a fairly small restaurant with clean, modern furnishings and décor acting as a backdrop for Pepe’s artwork and, when we were there on a Monday evening, there was a regular flow of customers and friends dropping in for a meal, or a drink. It’s obviously a popular place both locally and further afield – one couple had made the trek from the East coast.

Every dish at Pepe Pintos is prepared by Pepe himself (hence the small number of tables) and he describes his style as cocina casera moderna, or modern home cooking. The techniques and many of the combinations are creative and modern, with traditional Spanish and Mediterranean dishes providing the context and inspiration for his creations, which are presented in a colourful and distinctive artistic style, using swathes, blobs and swirls of sauces, oils and reductions.

We enjoyed several courses at Pepe Pintos, and have to say right away that there were absolutely no weak links in the succession of dishes that were presented to us by Tino, the considerate, helpful and friendly maitre. Every course was visually appealing, beautifully assembled, and cooked to perfection, and our meal was punctuated by exclamations like “wow” and “fantastic”. For me, the standout dishes were the tosta de setas agridulces y velouté trufada (if I can learn how to do mushrooms on toast like this, I’ll eat nothing else) and the bacalao a la plancha con berenjena , tomate, pimiento, pure de patata a las hierbas y coulis de espinaca which surely was cod perfection.

The female half of our team agreed about the mushrooms, but also loved the lightly cured salmon starter with its unusual beetroot companion (salmon curado al te flores) and thought that the slow cooked veal (ternera estofada en larga cocción) was out of this world. At either end, the meal was rounded out with beautiful appetisers and sweets to die for, and we enjoyed a bottle of red from Ribero del Duero (Pago de los Capellanes Joven 2007) suggested by Tino from the list of largely boutique wines coming mainly from Mallorca, the Peninsula and Argentina.

Pepe Pintos can cater on a set menu basis for all sizes of groups up to around 30 in the restaurant , and will also provide a catering service for any type of event – at home, on your yacht, at a company venue. Obviously, advance notice is necessary for these occasions. It’s probably best to phone ahead if you plan to visit the restaurant – as mentioned earlier, it deliberately has a small number of tables so that el cocinero can prepare every dish personally, so at weekends particularly, you may be disappointed if you take a chance.

We are already planning our next big family occasion to be either at, or catered by Pepe Pintos – that’s how much we enjoyed it. It’s not on the sea front, it doesn’t have mountain views, but it’s relaxed, happy,and the food is great – make the call, you’ll love it!