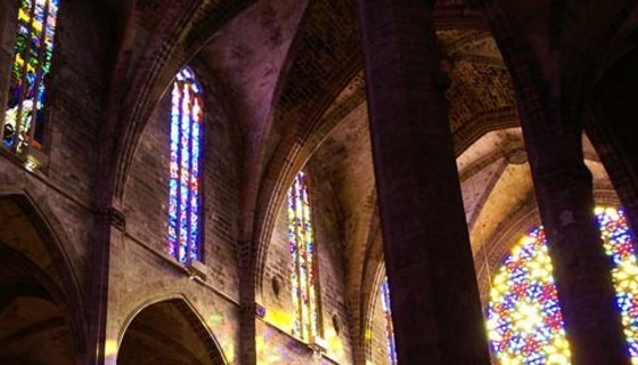 Nothing on Mallorca is more emblematic of the island and the history, art and faith of its peoples than La Seu, the Cathedral of Mallorca. It is, of course, a place of Catholic worship and prayer, but it is open to tourists from Monday to Saturday (times vary - please check the cathedral website for the latest information) virtually the whole year.

This magnificent Gothic building dominates the bay of Palma and the old town from a low hill behind the old city walls. When Jaume 1 reconquered Mallorca from the Moors in 1229, he seemed determined to obliterate all signs of the previous occupiers. Hence, apart from the Arab Baths, there are few architectural traces of that time, but the consolation is the magnificent Gothic cathedral erected on the site previously occupied by a mosque. Legend has it that the invasion fleet was caught up in a terrible storm on its way to Mallorca, and Jaume 1 promised to build a church to the Virgin Mary if the invasion was a success. Construction began the following year, but would not be complete for five centuries - in fact, the bell tower is still unfinished.

It's the vertical lines of this amazing construction that are awe inspiring. The golden sandstone blocks from the quarries at Santanyí soar towards the heavens in the form of pillars, spires, arches and towers. This is one of Europe's tallest Gothic structures and the 14 slim internal pillars rise to 21 metres before branching out to support the vaulted roof of the nave at 45 metres. The seven rose windows and many other stained glass openings reveal the full grandeur of this 121 metre long space, designed to allow the whole congregation to view the high altar.

The cathedral has seen many changes over the years, notably by the Modernista Catalan architect Antoni Gaudi, famous for his later creation, La Sagrada Familia in Barcelona. Although his ideas were still evolving when he was working - intermittently - in Palma between 1904 and 1914, the results were well received locally. More recently, in 2007 the astonishing ceramic murals by Felanitx artist Miguel Barceló were unveiled in the Blessed Sacrament Chapel. Inspired by the miracle of the loaves and fishes, this creation took six years to complete and covers an incredible 300 square metres.

There's a lot to see and think about in this wonderful building, including the great doors, the best of which faces the sea to the south (Portal del Mirador) and the Cathedral Museum. Just remember that flash photography, eating, drinking and smoking are not allowed, and you should wear suitable (not skimpy) clothing.